Trending
Much of India's Organic Cotton Exports Might be Fake, Reports the New York Times Budget Proposals for Use of Drones in Agriculture, Digitisation of Land Records and Organic Farming Lauded PM Modi Gives Farmers Freedom to Tap Markets but Not to Access Technology Bt Brinjal: Can Farmers Break the Law to Compel The Govt to Respect Lawful Procedure? Don't Bypass APMC Mandis; Allow Farmers to Sell Directly Outside Them, Say Ag Experts
Contract farming

If Jalgaon district were a state it would rank fifth in the country in banana production thanks to a company whose growth is intricately tied to the fortunes of farmers ─ its customers. While Jain Irrigation’s practice of collecting subsidy payments on behalf of farmers after installing drip irrigation systems on their fields had severely choked its cash flow because of delayed disbursements, its business model creates shared prosperity. Faced with the challenge of relieving rural distress, it is an example which the government could encourage, along with crop insurance, to make agriculture a paying activity.

India is the world’s largest banana producer at 101 million tonnes in 2012, according to the Food and Agriculture Organization and Maharashtra is the second largest producer in the country. Within the state, Jalgaon accounts for 72 percent of the production, much of it concentrated in a couple of talukas like Raver.

Jalgaon has been growing bananas for a long time being the gateway to the north India market but it is the Jain Irrigation group that has boosted its capacity by introducing a precocious variety, supplying high-yielding clones, teaching farmers effective nurturing practices through research, and selling micro-irrigation equipment that deliver water and fertilizer to plants in required doses and frequency. 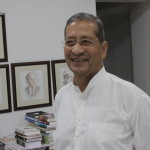 Bhavarlal Jain with his guides

Founder Bhavarlal Jain, who qualified for Maharashtra’s civil service, but quit to pursue entrepreneurship, regards his business as a social enterprise. His elegant, cool and well-lit office atop a leafy hill in Jalgaon has the stillness of a library where he spends retirement in rumination, drawing unkind comparisons with indigent cattle doing likewise in a goshala a little distance away. The choice of icons displayed on the wall, that of Mahatma Gandhi, Jawaharlal Nehru and JRD Tata, acknowledge qualities he appreciates: harmony with nature, grandness of vision, and bold execution. Further uphill is   multimedia homage called Gandhi Teerth, a museum and research institution, that must find place in a tourist’s itinerary to the town.

Being from a state where more than eighty percent of cultivated land is rain-fed, the idea of drop by drop irrigation clicked with Jain while at a trade exhibition in the United States in the mid-1980s, resulting in business collaboration. Those were days of import substitution, when foreign exchange was regarded as precious, so he was not surprised when a trade official asked why the technology fee payment of $30,000 should be permitted, when the country was not importing the item he sought to conserve.

The company reckoned that Jalgaon farmers would invest in drip irrigation if it paid for itself. They had to regard it not just as a water-saving device but a productivity enhancing tool. Banana is a high value crop, compared to the district’s staples, cotton and jower, but was regarded as a sponge. It was grown in pits into which farmers would channel water by blocking or opening furrows. The rhizomes or suckers used as planting material varied in age, weight and genetic make-up and this told on the output.

Three banana varieties were imported in the early 1990s from an Israeli company specializing in plant propagation and tissue culture, and one of them, called Grand Naine, of Honduran origin, was selected for its appealing golden yellow colour, fruit yield within a year (eighteen months for traditional Indian varieties) and the tendency of secondary shoots to give two more harvests (called ratooning).

The company produces 60 million tissue culture Grand Nain plants now that take ten months to transit from lab to farmers’ fields. These are sold for Rs 13 each, and despite being around three times costlier than their country cousins, are unable to keep up with demand.

Jalgaon has the right soil and heat, but its dry weather does not have the humidity of 65 percent that bananas require. Drip irrigation compensates by keeping the surface always wet. The dense canopy created through close planting arrests evaporating moisture. Hot air from outside, with humidity less than 20 percent, is blocked with tall leguminous plants grown around the periphery, which can be ploughed into the soil to improve fertility. The same purpose is served by shade nets with dripping water around the perimeter, which act like desert coolers. Farmers are advised to provide chemical fertilizers through the year and increase the frequency and dosage of micronutrients in summer so that the plants can cope with heat stress. Another recent innovation, that is planting in late March, instead of June, keeps plants short, leaves small and water need low in peak summer months. 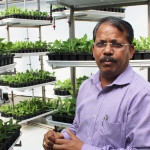 K B Patil at a futuristic farm for apartments.

‘Because of micro-irrigation Jalgaon has become the banana bowl of the country,’ says Kalyansing Baburao Patil, who is vice-president for tissue culture and agricultural services and has a doctorate in banana cultivation. His enthusiasm for banana farming does not seem to have dimmed over the 22 years he has been with Jain Irrigation. Talking to him about the fruit is like setting off a perpetual motion machine, the reason why his initials are teasingly twisted as standing for Kela Becho Patil.

Patil’s passion and Jain Irrigation’s engagement with banana cultivation have produced prosperous farmers, some of whom make more than a crore rupees in profit annually.  Laxman Onkar Chaudhuri, 63, better known a LO, wanted to be a school teacher after obtaining a diploma in education (D.Ed). From three own acres when he started, he now leases in 200 acres and reaps 39 tonnes an acre against the state’s average productivity of 23 tonnes. At Rs 7 a kg, he earns more money than most Indians do.

Tenu Dongar Borole, 61, also of the same village, sold tea in the village central jumble, after schooling. With 72,000 plants, his annual earning is in the range of Rs 1.5 cr. Drip irrigation not only allows him to calibrate the supply of water and fertilizer, it frees him from being dependent on workers as large stretches can be watered during the short window when power is available.

Avinash Patil, 32, of Shingadi village, turned to banana farming when three years of search could not fetch him a job after completion of B.Sc in computers in 2005. Over the objections of his father, who feared getting deeper into debt, he tried out tissue culture. He grows bananas on ten acres, and earns about Rs 20 lakh a year. His example has been emulated by others in the village. Some are wondering whether it is worthwhile pursuing studies, he says, a comment both on the quality of education and the prospects of horticulture. 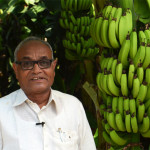 Bananas are grown over 1.18 lakh acres in Jalgaon according to official statistics. Cotton and jowar are the main crops, but even their farmers use the drip system, says K B Patil. He asserts that the water table has risen. Even farmers like Avinash, whose plot is on the banks of the river Tapi, use drip irrigation, so that the soil is well aerated. This is a change from traditional thinking.

‘We are in the business of changing mindsets,’ says joint managing director, Ajit Jain. India’s area under micro-irrigation (both sprinkler and drip) was 8 percent of the irrigated land at last count, against USA’s 57 percent and Brazil’s 61 percent. That is a lot of unfinished business for Jain Irrigation, but the biggest challenge is to change the thinking of our political establishment about agribusinesses.

By admin
How does NDDB propose to organize pulses farmers? Will it be under the aegis of the existing milk…
END_OF_DOCUMENT_TOKEN_TO_BE_REPLACED
0
0
0
Share