Trending
PM Modi Gives Farmers Freedom to Tap Markets but Not to Access Technology Don't Bypass APMC Mandis; Allow Farmers to Sell Directly Outside Them, Say Ag Experts Much of India's Organic Cotton Exports Might be Fake, Reports the New York Times Budget Proposals for Use of Drones in Agriculture, Digitisation of Land Records and Organic Farming Lauded Bt Brinjal: Can Farmers Break the Law to Compel The Govt to Respect Lawful Procedure?
Agriculture PolicyBt technology

The two participants did not agree on whether global competitiveness should be the overarching goal, reflecting two strands of opinion that bear on the Indian dairy industry – one development oriented and the other rooting for profits. 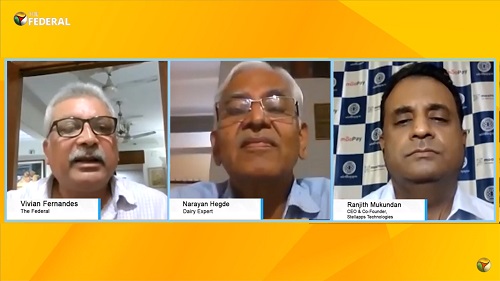 India is the world largest milk producer. Annual production over the past three years has averaged 199 million tonnes, which is 50 percent more than the average annual output 10 years ago. But the annual yield per cow in India in 2020 was 1,700 kg and that of a buffalo 2,000 kg, as per FAOSTAT, the statistical database of the Food and Agricultural Organisation (FAO).  This compares unfavourably with Israel’s 12,700 kg, USA’s 10,800 kg and 4,500 kg of New Zealand. India is also a bit player in the global milk product market. In 2021, New Zealand exported 3,26,000 tonnes of skim milk powder (SMP). India’s did 37,000 tonnes between April and December last year.

“The primary objective,” of Indian dairying has been “to engage more farmers in milk production,” said Narayan Hedge, a veteran of the dairy industry with more than four decades of engagement with Bharatiya Agro Industries Foundation (BAIF), now called BAIF Development Research Centre (BDRC). Pune-based BAIF was started in the 1970s by Mahatma Gandhi’s discipline Manibhai Desai to pull small farmers out of poverty via milk production. These farmers did not have enough land to gain from Green Revolution technologies. Since the cattle they possessed were non-descript indigenous breeds with low milk yields, BAIF tried to improve the genetic stock by cross breeding the animals with high-yielding indigenous cattle or exotic ones like Jersey and Holstein Friesian. It pioneered the delivery of frozen semen of high-yielding cattle in canisters to rural areas for artificial insemination.

India should not shy away from a free trade agreement (FTA) with New Zealand and Australia and should join it over the next 36 months, said Ranjith Mukundan, CEO and Co-Founder of Stellapps Technologies, a start-up which began operations in April 2011. If India set a target date for joining the FTA, it could work backwards to make the industry competitive, Mukundan observed.

R G Chandramohan, founder and Managing Director of Chennai-based Hatsun Agro Product, India’s largest private dairy, says India can be a competitive producer of milk. In a 2020 newspaper article, he wrote that Indian milk farmers can be globally competitive because the country’s tropical weather allows cultivation of fodder round the year, unlike in Europe, New Zealand and Australia which experience long and severe winters. They should grow Co-5, bajra-napier hybrid grass developed by Tamil Nadu Agricultural University (TNAU). With proper irrigation, they could harvest about 30-35 tonnes of this grass a year and get about 20,000 litres of milk per acre, which could make them competitive.

Hegde said Chandramogan’s model was suitable for those who had land and irrigation facilities. Fifty-five percent of fodder came from crop residues, he said, but farmers did not make economic use of it. Chopping can increase the digestibility of jowar and bajra stalks by 10 percent and reduce methane emissions by that amount, he said.

Cooperatives, which are the mainstay of the Indian dairy industry, do not want India to join the FTA fearing large-scale distress. Hegde says global competitiveness can be achieved by corporate dairies, but that would deprive small farmers of their livelihoods. Rather the emphasis should be on improving milk yields and reducing cost of production through scientific practices. Hegde, who was President and Managing Trustee of BDRC till 2009 and its trustee till 2019, says the government’s emphasis on conserving and improving the stock of desi breeds through the Rashtriya Gokul Mission (RGM) launched in December 2014, is “misplaced.” There is no scientific basis to the government’s claims that their milk is tastier and healthier. Rather, the farmer must be given information so that they can choose what best suits their capabilities.

Of the 37 indigenous breeds, only four – Gir, Red Sindhi, Sahiwal and Tharparkar – are milk breeds, Hegde said. But there are not enough of them to go around.  The desi breeds need little care, but they are also low-yielding.  As per the animal husbandry department, an exotic cow gives 9.15 kg of milk a day and a cross-bred animal 7.22 kg. A non-descript desi breed gives 2.71 kg a day. RGM has helped raise the productivity of indigenous and non-descript cattle by 8.6 percent from 913 kg per animal per year in 2013-14 to 992 kg —an underwhelming achievement. The difference in milk yield between cross-bred and desi cows is about a thousand litres or Rs 30,000, Hedge said, a substantial amount for a poor family.

Looking at the inter-calving period and the yield “I think indigenous animals are not very commercially viable,” Mukundan said. Cross-bred animals give about 10-15 litres a day. They may not be champion producers like Jersey or Holstein Friesian which give about 30 litres a day, but they don’t need air-conditioning and can withstand Indian summers. “The whole fad about desi, I think, is completely misplaced.”

Mukundan said the focus should be on unit economics and milk output. At Stellapps, he wanted to get farmers to graduate from 2-3 animals to about six. Once they were comfortable managing this number, the next step was to move them to 18-20. The idea is to get small holders to be micro-entrepreneurs, he said.

Stellapps uses digital technologies to make the dairy value chain more efficient. It not only provides technologies to monitor cow health (like bands fitted with sensors around their legs), but also financial services, feed and nutrition products and market linkages. The company says it has about a thousand milk collection centres, which it uses as an entry point to provide a variety of services to farmers.

Both the participants agreed that animals with flagging productivity should be allowed to be put to sleep. Cow vigilantes have made the cattle trade quite risky. Low yielding animals drain money and should be culled. Sex sorted semen is not a solution. They cost about 5-6 times the price of a dose of conventional dose of semen and though more females are produced, these females will have to be culled as they age. Before 2014, farmers would sell gaining animals to meat traders and buy new ones. This natural cycle has been interrupted by politics.

Link to the video interview on thefederal.com\