Trending
Don't Bypass APMC Mandis; Allow Farmers to Sell Directly Outside Them, Say Ag Experts Budget Proposals for Use of Drones in Agriculture, Digitisation of Land Records and Organic Farming Lauded PM Modi Gives Farmers Freedom to Tap Markets but Not to Access Technology Bt Brinjal: Can Farmers Break the Law to Compel The Govt to Respect Lawful Procedure? Much of India's Organic Cotton Exports Might be Fake, Reports the New York Times
Agriculture PolicyBriefingRice

Though eco-toxicity levels were higher in direct wet seeded rice because of the increased use of organophosphates, the study concludes that direct wet seeding can ‘truly be designated as sustainable intensification of rice production.’

For the study, IIRR rice experts interviewed ninety direct wet seeding rice farmers and eight four practising transplanting between April and May 2014.  The data were passed through BASF’s proprietary AgBalance model, which uses life cycle analysis based on International Standards Organization (ISO) principles.  The model has up to sixty nine indicators. It was developed five years ago and has been used in the United States for corn; in South America for corn, soybean and cotton; canola in Canada; tomato in China; and wheat and barley in Europe. 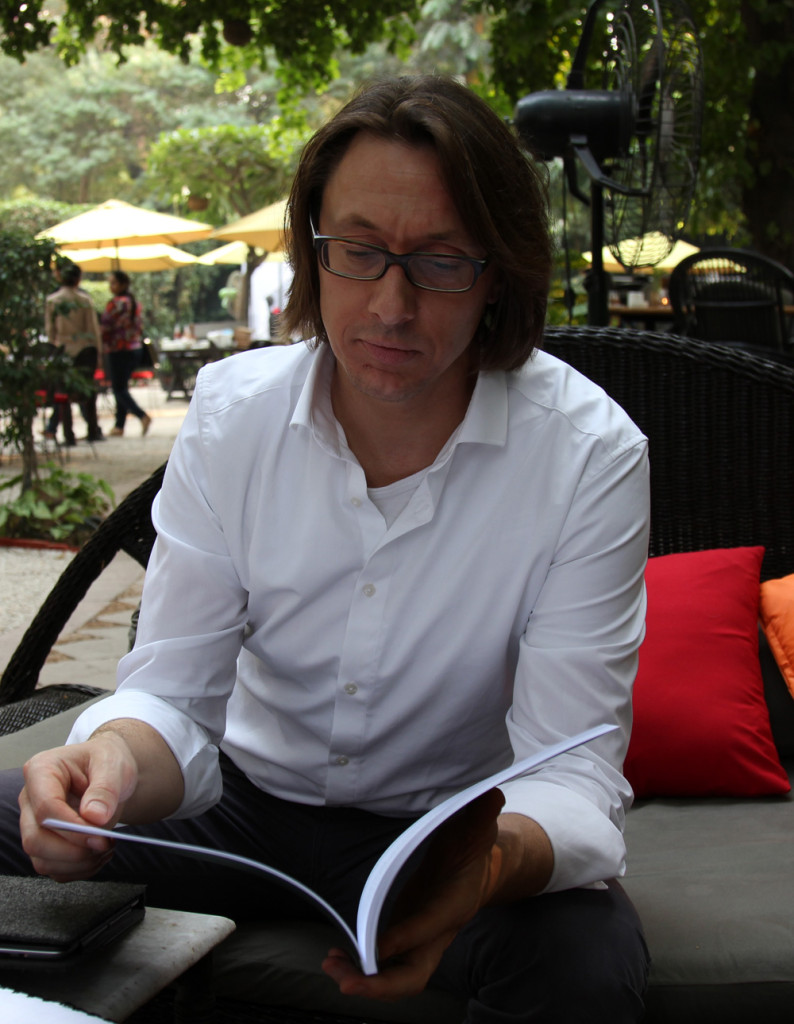 BASF’s Martijn Gipmans with the study. Photo by Vivian Fernandes

‘We are now in discussions to expand to nine other regions in India, including those with water shortages,’ Martijn Gipmans, BASF’s Global Sustainability Manager, and one of the authors of the study said.

* Because of higher yield, DWSR farmers scored better in land use, energy consumption, water use and farm profits.

* Farmers with longer experience of DWSR can achieve additional yield increases of fifteen percent over TPR due to their expertise in direct seeding techniques which would further improve their profits and environmental performance.

* DWSR farmers applied more quantities of organophosphate insecticides which gave them worse scores for eco-toxicity.  These farmers feared a rapid spreading of brown plant hopper due to denser and closed canopies compared to TPR. If these are replaced with less harmful insecticides ─ chlorantaniprole for stem borers and pymetrozene for plant hoppers ─ the scores would improve.

Gipmans said the study was not intended to promote the use of BASF chemicals. ‘The company is not big in insecticides,’ he said. The intention was to build a long-term relationship with IIRR. BASF is in the early stages of developing high-yielding transgenic rice.

*DWSR farmers also use moderately higher amounts of farm yard and green manure and zinc fertiliser. The decomposition of organic manure in flooded rice fields releases more methane. The emission of this earth warming gas can be reduced by using more mineral fertilizer. Increased energy consumption to produce chemical nutrients is compensated by a reduction in methane.

*Zinc is important for rice productivity but increases consumption of fertilizers. So over-fertilization should be avoided.

* Farmers with fields in the lower end of the cascading canal irrigation system have difficulty in controlling water levels. Both TPR and DSWR farmers continuously submerge their fields during the main growing period in the Godavari area. But if they alternately wet and dry the fields, there would be reduced use of water and emission of methane.

* A nitrogen pre-fixing pre-crop such as Sesbania can decrease nitrogen leaching, substitute mineral fertilizers, increase phosphorous availability and improve yields. Overall this has substantial environmental benefits (despite a small increase in GHG emissions through conversion of green manure to methane).

In transplanted rice, mechanical transplanting can increase profits; the saving in wages being more than the cost of hiring equipment. If irrigation demand is managed, a reduction in water use and GHGs can be achieved.  Given the nature of the transplanted system, the potential for reducing water use is less than DWSR. The use of Sesbania as a pre-crop would make TPR more sustainable.