Trending
Bt Brinjal: Can Farmers Break the Law to Compel The Govt to Respect Lawful Procedure? Budget Proposals for Use of Drones in Agriculture, Digitisation of Land Records and Organic Farming Lauded PM Modi Gives Farmers Freedom to Tap Markets but Not to Access Technology Don't Bypass APMC Mandis; Allow Farmers to Sell Directly Outside Them, Say Ag Experts Much of India's Organic Cotton Exports Might be Fake, Reports the New York Times
Agri-biotechnologyBt technology

Dispelling Falsehoods about GM Crops: What India Can Learn from the Philippines

Vivian Fernandes was in the Philippines recently. He reports on the country’s advocacy and outreach on GM crops to create public opinion in favour of the technology.

With Prakash Javadekar taking charge of the environment ministry from the inert Harsh Vardhan and hopes kindling of genetically-engineered brinjal and mustard being approved for cultivation, one wishes the government had a specialized communication agency for advocacy and outreach to create public opinion favourable for agri-biotechnology.

Though India approved Bt cotton, genetically-engineered to be toxic to the American bollworm in 2002, and permitted another variant in 2006, both of which farmers have enthusiastically embraced, those opposing have been so successful in demonising the technology, that no other crop – Bt brinjal, herbicide-tolerant cotton, or GM mustard – have got the nod for cultivation.

Javadekar is known to be in favour of the science. In December 2015, he told me that he was “determined” to approve GM mustard. But before he could take a decision, he was shifted to the HRD ministry. Any positive moves he makes now will be met with strong opposition from anti-GM activists, including the Swadeshi Jagran Manch, one of 36 organizations affiliated to the Rashtriya Swayamsevak Sangh, the mentor of the ruling party.

Over the past 15 years, both the UPA and NDA governments stalled; they did not approve new GM crops. Only a few political leaders support the technology. But farmers are restive. They have planted large tracts with illegal herbicide-tolerant (HT) cotton. In May, a farmer in Haryana was forced to destroy his illegal Bt brinjal crop, which he found profitable because it required very few sprays against the fruit and shoot borer. On June 10 the Shetkari Sanghatana, founded by the pro-market and pro-technology Sharad Joshi, defied the law and planted illegal HT cotton and Bt brinjal near Akola in Maharashtra demanding time-bound approvals and certainty in access to agri-biotechnology.

The government could learn from the Philippines which set up a Biotech Programme Office in 2000 to promote the responsible use of agri-biotechnology to sustain food security. It was educative to meet its Director-Coordinator Annalyn Lopez during a visit to Manila in April at the invitation and expense of CropLife Asia, which represents the agri-biotechnology industry in this part of the world.

Apart from overseeing biotech research and development; developing skills in officials to regulate GM crops; and promoting policy research and advocacy the Biotech Programme Office strives for public understanding and acceptance of agri-biotechnology. “Communicating health and safety to lay people is difficult because biotech is sophisticated,” says Lopez. “We are communicating to people who may not have a background in science.”

Both India and the Philippines are democracies, though the latter has a history of military dictatorships. India was first off on GM crops. It approved Bt cotton in 2002. The Philippines permitted GM corn resistant to the Asian corn borer in 2003. About 70 percent of yellow corn (there is a white variety too) grown in the Philippines is GM corn, says Lopez. From 50,000 hectares in 2004, it now covers 642,000 hectares with 470,000 farmers planting it. That’s about 46 percent of the Philippines’ corn area. In India, 93 percent of cotton planted in 2017 was of the GM kind.

Both India and the Philippines have strong anti-GM groups. In the Philippines, they have vandalized Golden Rice trials. Greenpeace moved its Supreme Court against Bt brinjal trials, which in 2013, halted the trials, nullified the 2002 biosafety regulations and temporarily halted all applications for authorization of GM crop trials, commercialization and imports. In 2016, it lifted its injunctions and recognized the newly-issued biosafety regulations. India’s Supreme Court is also quite adversarial.

Lopez says partnerships are important. Her office has enlisted TV broadcasters and print media journalists. It gives awards from biotech journalism since 2006. It publishes a biotech magazine with uplifting testimonials. In 2011, it teamed up with the network of rural radio broadcasters.  Many towns have declared their support for biotechnology. Lopez says her office has developed courses to educate their chief executives. In association with the Biotech Coalition of the Philippines, it pushes for regulation based on science and evidence. The International Rice Research Institute and the Philippine Rice Research Institute are partners for Golden Rice bio-fortified with pro-Vitamin A beta-carotene. 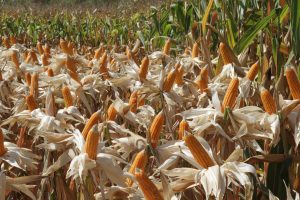 A GM corn field in the municipality of Concepcion in Tarlac province near Manila. Photo by Vivian Fernandes.

The Biotech Program Office encourages high school and college students to opt for biotech courses. It has developed curricula for them. It holds short film, jingle-making and public-speaking contests on biotech for them. A computer game – biotech crops vs zombies – has been developed. Students also participated in a fashion show with clothes made of GM corn kernels and cobs.

Lopez says her office reaches out to politicians who are neutral or don’t have a stand on GM crops. They may be the chairperson of a committee in Congress or influential in their political party. Once an appointment is secured, she makes sure that good communicators are fielded. These need not be scientists. They may be farmers who have a good story to tell about how GM corn has benefitted them. The politicians are taken to farms so they can see for themselves that GM corn is no different from the non-GM variety.  Regulators are also invited to engage with politicians; they explain the regulatory process and but don’t do advocacy so their integrity is not doubted. 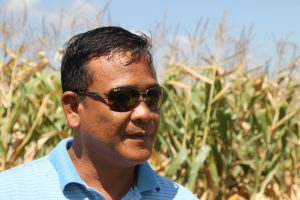 Jerry Basilio, 44, a farmer in the municipality of Concepcion, Tarlac province. He grows GM corn and also trades in it. Photo by Vivian Fernandes.

Since the Philippines is strongly religious Lopez says her office engages with religious leaders too. Because of its outreach, a Catholic priest has become a member of a technical advisory committee on bio-safety. A representative was also sent to an international halal conference, which said GM food is kosher because it does not contain pork.

Through a presidential proclamation in 2005, the first week of July is celebrated as National Biotechnology Week.

But well-funded NGOs pose a challenge, says Lopez.  There are legislative proposals to disallow GM crops. Resolutions against them have been passed by local bodies. There is fake news in the social media. Consumers have low exposure to factual information.

“We have our own voice, make our own choice, and assert the right to technology. That is what we are driven by,” says Lopez.

In India, there is strong support for GM crops in scientific circles. The National Academy of Agricultural Sciences (NAAS) has passed a resolution in favour of the technology. It has supported GM mustard and even written to the Prime Minister not to withhold approval.

The apex regulator, GEAC, has recommended release of Bt brinjal and GM mustard for commercial cultivation. It has asked the Indian Institute of Horticultural Research (IIHR) in Bengaluru to study and report Bangladesh’s experience with Bt brinjal, so it can revisit the moratorium on release imposed in 2010. 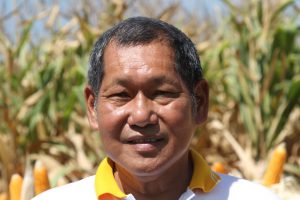 Sonny Guevara of Murcia village in Tarlac province has been planting GM corn since 2004. He sells directly to piggeries. Photo by Vivian Fernandes.

The English national dailies have favoured GM crop technology through their editorials, though their reporters tend to support the activists.

In 2015, Karnataka’s expert committee on agricultural biotechnology had advised the state government to set aside Rs 10 cr to support NGOs with acceptable proposals on public outreach so that correct information about the safety and benefits of GM crops could be communicated to the public and misinformation spread by anti-GM activists could be countered. The committee was headed by M. Mahadevappa, a well-known rice scientist and former vice-chancellor of the University of Agricultural Sciences, Dharwad. It also wanted public outreach cells in agricultural universities for creation of awareness about biotechnology.

The BJP’s Lok Sabha election campaign is a case study in marketing. Javadekar could take some cues from it.

By vivian fernandes
Raw cotton or kapas prices have doubled since last year. At the Rajkot regulated mandi, the minimum…
END_OF_DOCUMENT_TOKEN_TO_BE_REPLACED
0
0
0
Share