Trending
Much of India's Organic Cotton Exports Might be Fake, Reports the New York Times Budget Proposals for Use of Drones in Agriculture, Digitisation of Land Records and Organic Farming Lauded PM Modi Gives Farmers Freedom to Tap Markets but Not to Access Technology Bt Brinjal: Can Farmers Break the Law to Compel The Govt to Respect Lawful Procedure? Don't Bypass APMC Mandis; Allow Farmers to Sell Directly Outside Them, Say Ag Experts
Agriculture PolicyBriefing

How Winter Crop Chickpea or Chana, Elbowed Out of North India By the Green Revolution, Adapted to Warm Andhra

The adaptation of chickpea or chana, a winter crop edged out of northern India by the Green Revolution in wheat and rice, to the warm climates of south and central India, is an event that is perhaps little known outside the realm of agricultural researchers, reports Vivian Fernandes from Kurnool, Nandyal and Hyderabad in Andhra Pradesh.

The green revolutions in wheat and rice, enabled by the crossing of traditional Indian varieties with short-statured, high-yielding and fertilizer-responsive ones imported respectively from the International Maize and Wheat Improvement Centre (CIMMYT) in Mexico and the International Rice Research Institute (IRRI) in the Philippines resulted in a quick step-up of both yields and output.  But the “Silent Chickpea Revolution of Andhra Pradesh” took a long time to bake. The pace was slow and the “revolution” was hardly noticed.

Even as chickpea was being displaced from northern India, it helped that the International Crops Research Institute for the Semi-Arid Tropics (ICRISAT) was set up near Hyderabad in 1972.  Like the two organisations mentioned before, it is part of a global network of 15 agricultural research institutions, collectively known as CGIAR that were put together by the World Bank.  Apart from sorghum, groundnut, pigeonpea and millets. Icrisat took up chickpea for breeding.

The chickpea varieties cultivated in northern India thrived in cold winters and matured in about 150 days. In south and central India, the winters, if they can be called so, are short. The crop has to face dry and hot weather as it matures and is likely to be attacked by wilt and pod borers.

The first set of varieties developed at Icrisat, wilt-resistant and maturing in about 100 days, was released in 1993 after four years of strategic and 12 years of applied research. Icrisat’s vast collection of propagating material (or germplasm) with useful traits aided the adaptation. These varieties were trialled at the research stations of state agricultural universities at Jabalpur, Guntur, Nandyal, Sehore, Akola and Rahuri. The trials were coordinated by the Indian Institute of Pulses Research (IIPR) in Kanpur. It was a collaborative effort.

The initial varieties did not click with farmers. The second set was released between 1990 and early 2000s after six more years of research. They won over the farmers of Andhra Pradesh and by 2012 had replaced Annigeri, a desi variety released in 1978. Farmers gained from higher yields and lower unit cost of production.

Among the new popular varieties was JG 11 developed at the research station in Sehore, near Bhopal, with Icrisat lines. The station was then part of the Jabalpur-based Jawaharlal Nehru Krishi Vishya Vidyalaya. In the all India trials it was found suitable for southern India. Chickpea breeder S K Rao who was at the Jabalpur university recalls requisitioning about one quintal of the seed from the breeder in Sehore and producing in two years about 500 quintals of nucleus seed through a network of 55 farmers.  Rao, who is Vice-Chancellor of a state agricultural university in Gwalior, is credited with helping set up Madhya Pradesh’s seed supply system. He tapped the State Farms Corporation and the seed corporations of Andhra and Karnataka to produce foundation and certified seeds which were distributed to farmers of the respective states. JG 11, a desi variety, resistant to wilt and tolerant to the pod borer replaced Annigeri over time. Both have similar maturities – 100 days – but JG 11 can give a yield of 1,483 kg per hectare on the lower side, about 50 percent more than that of Annigeri.

The regional research station in Nandyal of the state agricultural university in Hyderabad set up in 2004, released varieties like NBeG 3 in 2012 which tolerates drought and heat. NBeG 119 is a bold Kabuli variety, a hundred seeds of which weigh 42 grams (compared to 23 grams for JG 11).  NBeG 47, released in 2015 is a machine-harvestable variety.  It is about two feet fall – double the height of manually-harvested ones – with branches starting about one foot from the ground. In all about more than 20 varieties have been released for Andhra

Owing to these developments, chickpea has made up for the loss of area in northern India.  In Punjab, the chickpea area, which averaged 3.2 lakh hectares between 1971 and 1980, fell to about 4,400 hectares during 2001-10.  Now, Punjab does not figure among the major chickpea-producing states. At 580,000 hectares, the area in Uttar Pradesh has declined to a third of its 1971-80 level. But the country’s chickpea area of 7.5 million ha during 1971-75 has increased to 8.22 million hectares.

Among the five major chickpea-growing states, Andhra Pradesh has the lowest area, averaging 538,000 hectares between 2010-11 and 2015-16. But it is an eight-fold increase from the average of 64,700 hectares during 1971-80.  Madhya Pradesh, the largest chickpea producing state has seen a seven fold increase to over three million hectares during this period. Karnataka’s area under chickpea has grown six-fold to a little less than one million hectares, while that of Maharashtra has increased more than three-fold to 1.44 million hectares.

Getting farmers to grow a new crop is not easy. Some will take the initiative, while others will await the success of the first-movers. The chickpea plant is also not precocious. Effectively, each will yield about 20 good seeds. Multiplication takes time. The seed rate is also high. An acre needs about 40 kg of seed, while for pigeonpea or tur 3 kg will suffice.

Average annual production of chickpea has risen from the annual average of 4.88 million tonnes during 1970-80 to 7.38 million tonnes during 2005-15. This is a reason for India achieving sufficiency in pulses. “The production of pulses has stabilized,” says Narendra Pratap Singh, Director of IIPR, who coordinated the all India chickpea trials for nine years till 2014-15. Chickpea has been the prime contributor, as it accounts for 46 percent of the country’s pulses production. 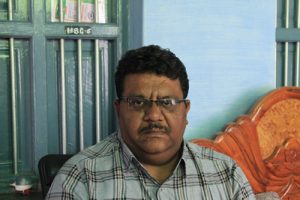 “Chickpea is best and easy farming method,” says Y. Govardhan Reddy, 42, of Balapanur village in Kurnool district’s Panyam mandal. A traditional chickpea grower he was the first to switch to the new varieties in his village. He produces seed for the Nandyal research station, which fetches him a 25 percent mark-up over the market price of the pulse. Reddy says he gets 10 quintals of output per acre, which is higher than the average productivity of the district. At the market price of Rs 4,500 a quintal (lower than the government’s support price), he should have made a decent profit, had the drought this year not let him down.

Chickpea needs two irrigations. A bag of DAP fertiliser is enough for one acre. The cost of cultivation ranges between Rs 12,000 to Rs 16,000 an acre, excluding the value of family labour and own capital, according to V Jayalakshmi, Principal Scientist at the Nandyal research station. More than 95 percent of the chickpea area in Andhra is under new varieties, she says.

Sreeramulu, 45, also of Balapanur village, has seen his yield shrink to 3 quintals an acre – a third of usual – despite irrigation. It is aberration that does not dishearten him. “This is a guarantee crop,” he says. Reddy grows a variety of pulses including chickpea on 30 acres which he cultivates jointly with four brothers. 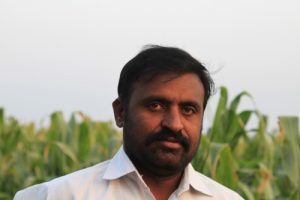 At Pathakandukuru village in Kurnool district’s Allagadda mandal, R. Radhakrishna, 35, has planted NBeG 47, a machine harvestable, large-seed desi chana variety. Last year, he harvested 7.5 quintals hectare which he sold as seed, at a premium. A graduate in science with a diploma in agriculture, Radhakrishna finds chickpea a better bet than mungbean because it needs less water, fertiliser, pesticides and labour.

There are inventive farmers like M. Venkatrami Reddy, 65, of Kotapadu village in Kurnool district’s Kolimigundla mandal.  He has planted chickpea on ridges, with furrows in between for irrigation to minimise water use. He hopes to save a substantial sum by displacing workers with bullocks for weeding. Because of the wide spacing between 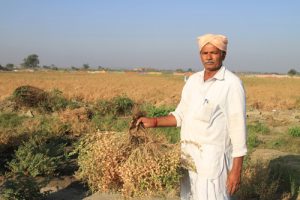 ridges, he had used 15 kg of seed per acre (a third of the norm) but had hoped to harvest about four quintals more.  The lack of rains has scuttled his plans.

“The adoption of new varieties and good agronomic practices,” are aspects that India can learn from Myanmar and Ethiopia, says Pooran Guar, Research Director for Asia at Icrisat. He has overseen chickpea breeding at the institute since he moved from Jabalpur University in 2001. (In April Icrisat awarded him for chickpea breeding).  In Myanmar 96 percent of the chickpea varieties are Icrisat’s. Ethiopia has a high average productivity of about two tonnes per hectare. Comparing India, where chickpea is grown in diverse conditions, to them “is not fair,” he says.  But chickpea farmers in Maharashtra, Madhya Pradesh and Karnataka can gain by imitating those of Andhra. By planting new varieties and given them proper care, they can raise their yield considerably.