Trending
Budget Proposals for Use of Drones in Agriculture, Digitisation of Land Records and Organic Farming Lauded PM Modi Gives Farmers Freedom to Tap Markets but Not to Access Technology Don't Bypass APMC Mandis; Allow Farmers to Sell Directly Outside Them, Say Ag Experts Much of India's Organic Cotton Exports Might be Fake, Reports the New York Times Bt Brinjal: Can Farmers Break the Law to Compel The Govt to Respect Lawful Procedure?
Agriculture PolicyBt technology

There was a good supply response to increased demand for medicinal herbs and aromatic plants owing to heightened consumer interest in immunity-boosting products because of the Covid-19 pandemic, Somit Mukherjee, Chief Procurement Officer, Dabur India, told smarindianagriculture.com’s Vivian Fernandes in a  Zoom interview.

Dabur is India’s largest Ayurveda-based fast-moving consumer goods company (FMCG) with over 250 products made from about 60 herbs and Rs 11,000 cr in revenue last year.

Somit Mukherjee (right) with Vivian Fernandes in a Zoom interview

The number of suppliers participating in the company’s annual online procurement rose to 60-70 from 40-60. The response in the last two years was the best since 2002, when online bidding was initiated to improve transparency and reach, Mukherjee said. Herbs found in the wild or grown casually made their way into the market as non-governmental organisations (NGOs) and self-help groups sought the company’s help in identifying herbs of interest and aggregated them from small farmers. The company prefers to operate through aggregators are herbs are grown in non-contiguous patches.

The company’s 2020-21 annual report says its healthcare business saw “high tailwinds” with growing consumer demand for Ayurveda-based immunity-building products. Sales in the vertical, which accounts for 36 percent of the company’s FMCG business, grew 32 percent that year. The report says competition in segments like chyawanprash (a tonic) was acute as new players entered the market and existing ones sought to expand their share. But the 2021-22 annual report says sales of health 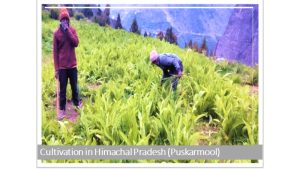 supplements ended flat despite strong growth in the first half of the year due to high-base effect and “waning demand for immunity products,” indicating that interest in health and wellness in a segment of consumers was episodic. Mukherjee said though demand for wellness products had leveled off, it had settled at a higher level.

Mukherjee said small and marginal farmers (those with less than 5 acres of land) could grow medicinal herbs and aromatic plants as an additional, steady source of income. Though their prices are volatile, they are range-bound. He did not recommend farmers shifting land from bread-and-butter field crops. Those interested in cultivating medical herbs could contact the company through its website, he said.

According to the Lucknow-based Central Institute of Medicinal and Aromatic Plants, the cultivation of menthol-rich mint varieties which mature in three months can yield a profit of Rs 60,000 per hectare. The cultivation of khus with improved oil yield of 25 kg per hectare is also very profitable. Geranium cultivated in degraded, saline soils can provide an additional source of income to small and marginal farmers, it says. 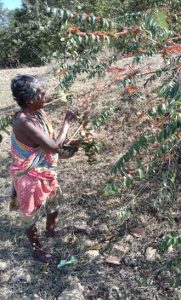 A tribal woman collecting forest produce for Dabur. Courtesty of the company.

Dabur has contract-farming arrangements with 9,770 herb growers. It also collects honey from 4,675 beekeepers. The company has a tribal outreach programme too. The Udaipur regulated market yard, for instance, trades in minor forest produce like amla, neem, white musli and mahua after the government ease the regulations. Mukherjee said Dabur buys dried amla from the tribals of Rajasthan. It is also engaged with tribals in Odisha. The company supplies about 30 lakh herb saplings from its nurseries in Pantnagar (Uttarakhand) and Banepa in Nepal, he said. It has also set up a sandalwood tree farm to meet its requirements of sandal oil, as it takes about 15 years for the tree to be oil-bearing.

Mukherjee said overseas interest in herbal preparation came from the Indian diaspora. There was considerable interest also in Russia, even though Indians did not form a significant group there.  Since Dabur sells formulations, getting approval from the food and drug administrations of European and American markets was difficult. In view of demand, it has started marketing single herb tablets like haldi, tulsi, basil, giloy and ashwagandha tablets. But other exporters were cashing on the shift from synthetics and selling natural herbals extracts of olefins.