Trending
Much of India's Organic Cotton Exports Might be Fake, Reports the New York Times Budget Proposals for Use of Drones in Agriculture, Digitisation of Land Records and Organic Farming Lauded PM Modi Gives Farmers Freedom to Tap Markets but Not to Access Technology Bt Brinjal: Can Farmers Break the Law to Compel The Govt to Respect Lawful Procedure? Don't Bypass APMC Mandis; Allow Farmers to Sell Directly Outside Them, Say Ag Experts
Agri-biotechnologyAgriculture PolicyBriefing

By vivian fernandes
0
26857
0
Share
Rubber plants at the Rubber Board Institute of India, Kottayam. Photo by James Jacob.

The centre has overridden the states and brought in a law to give farmers a choice of agricultural markets but is dragging its feet on approving GM crops which can increase yields and reduce costs in a number of crops, reports Vivian Fernandes. 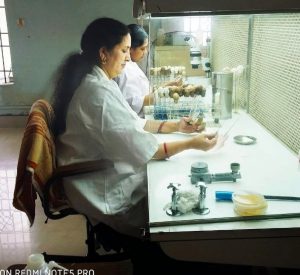 Laboratory at Rubber Board Institute. Photo courtesy of James Jacob.

In July, the apex regulator for GM crops, the Genetic Engineering Appraisal Committee (GEAC) allowed the Kottayam-based Rubber Board Institute of India to conduct confined field trials of GM rubber plant. The institute which comes under the Ministry of Commerce had obtained GEAC clearance for the trials ten years ago, in 2010. It had approached Kerala, Karnataka, Tamil Nadu, Maharashtra and Assam for permission to conduct the trials in those states. State government permission was a new requirement. It was not needed before 2010. Kerala’s Left-front government declined permission, for ideological reasons, though it is the biggest rubber-producing state. (So did the Congress government that followed). The other states either turned down the request or did not respond.  Assam was receptive and gave permission – in 2016. By then the 2010 clearance had lapsed.

To obtain approvals either for field trials or commercial cultivation of genetically-modified (GM) crops, research institutions and agricultural biotechnology companies must count time in decades, have patience without hope and be willing to endure ministerial whim. Agricultural biotechnology does not seem to figure in this government’s list of ease of doing business, costing the nation and farmers enormously in lost opportunities. Disdain for the technology cuts across the political spectrum. Both the UPA and NDA governments have shunned it for reasons that have no scientific basis.

In 2010, Environment Minister Jairam Ramesh had made it mandatory for states to give their no-objection certificates for field trials of GM crops. This was a purely political decision. He had earlier over-ruled the GEAC’s recommendation for commercial release of fruit-and-shoot borer-resistant Bt brinjal, which a technical sub-committee of GEAC comprising scientists, had declared as safe for humans, animals, non-target organisms and the environment. Unilaterally, he had also changed the mandate for GEAC from ‘approval’ to ‘appraisal’ vesting the power to approve GM plants for commercial release in himself.

Obtaining NOCs from states raises the degree of difficulty. Many of them are ideologically opposed to GM crops. Bihar Chief Minister Nitish Kumar is one of them. During Ashok Gehlot’s previous stint as Chief Minister of Rajasthan (2008-2013), GM mustard trials in the state were vandalised by anti-GM activists. Gehlot’s agriculture minister was not in favour of the technology, Deepak Pental, geneticist and former vice-chancellor of Delhi University said.

Pental headed the team that developed GM mustard hybrid, DMH-11 with funding from the Department of Biotechnology and the National Dairy Development Board. In May 2017, the GEAC recommended its commercial release. The National Academy of Agricultural Sciences (NAAS) passed a resolution in support and also wrote to the Prime Minister asking him to approve its cultivation. But three environment ministers since 2017 have not been able to overcome opposition from the RSS affiliate, the Swadeshi Jagran Manch.

The GM rubber plant whose confined field trials have been allowed has copies of its own genes inserted to enhance growth during adverse weather conditions – drought or very low temperature. The gene of interest is MnSOD or manganese superoxide dismutase. It belongs to the rubber species and is not a transgene.  But the ‘promoter’ which allows MnSOD to express itself, and the ‘marker’ that lets researchers know whether -and where – it is located in the plant genome, are foreign genes. Hence, bio-safety protocols applicable for GM crops have to be observed, says James Jacob, Director of the Rubber Board Institute.

Jacob says rubber plantations are increasing facing climate stress. In Kerala, droughts have become frequent, while in the north-east, very low temperatures inhibit rubber plant growth. He says demand for natural rubber is increasing. It is preferred for truck tyres in India because of the country’s load and road conditions, unlike in the developed countries were synthetic rubber is used. There are also certain applications were synthetic rubber is not a substitute. The country needs to produce more natural rubber and “GM technology is an apt approach,” Jacob says.

Even if the bio-safety trials show that GE rubber is safe, will its commercial cultivation be allowed? India’s experience with Bt brinjal and GM mustard does not give hope.

Based on India’s bio-safety data, Bangladesh Agricultural Research Institute (IARI) released Bt brinjal varieties for commercial cultivation in 2013. It has reported no safety issues so far.

Brinjal requires about 30 sprays per crop cycle because once the borer lodges in the shoots or fruit,  it is difficult for pesticides to reach it. “I spray brinjal every third or fourth day for fruit and shoot borer and I still lose 50 percent of my crop. We are not selling vegetables. We are selling poison. It hurts my conscience,” said Balwinder Singh Kang, an articulate and progressive farmer of Rajasthan on whose field trials of Bt cotton happened before it was released for mass cultivation in 2002.

In September 2018, the GEAC took up the application of Mahyco (a Jalna, Maharashtra-based, seed company) for lifting the 2010 freeze on release of Bt brinjal. It asked the Indian Council of Agricultural Research (ICAR) to study and report to it the post-release impact of Bt brinjal in Bangladesh. It is two years now but GEAC has not got the report from ICAR.

Though India’s per capital consumption of pesticides is low, people are worried about pesticide residues. Those who can afford it prefer to buy organic produce. Insect-resistant GM crops minimise the use of pesticides. If India was open to GM technology, farmers would have been able to cultivate herbicide-tolerant and insect-resistant (or HTBt) cotton, which considerably reduces the cost of weeding and bollworm management. Bt brinjal, Bt pigeon pea (tur), Bt chickpea (chana), HTBt maize (resistant to borers and Fall Armyworm), HTBt soybean and ringspot virus-resistant papaya would be available for them. The techniques used in GM mustard would have allowed hybrids to be developed efficiently unlike the current inefficient way of crafting them through cytoplasmic male sterility.

Considerable research has gone into the GM crops mentioned above. Many of them can be quickly released for cultivation. Tax payers and private shareholders are losing because of the government’s indecision. But the loss – though not visible – is also that of Indian farmers. They want access to useful technology.

For the past two seasons, farmers in Maharashtra have been planting unapproved HTBt cotton in open defiance of the law and in front of TV cameras. Last year, a farmer in Haryana’s Fatehabad was forced to uproot his illegal Bt brinjal crop and burn it.

Higher yield and less pesticide use will benefit farmers. The nation would gain from crops competitively produced. Freedom of access to technology is as important to farmers as the ability to freely trade in their produce.

(Top photo of rubber plants – not GM- at Rubber Board Institute of India. Courtesy of James Jacob).

By vivian fernandes
Excerpts from the government’s reply of  9 November, 2022 to writ petitions No 260 of 2005…
END_OF_DOCUMENT_TOKEN_TO_BE_REPLACED
0
0
0
Share
Agri-biotechnology