Trending
Bt Brinjal: Can Farmers Break the Law to Compel The Govt to Respect Lawful Procedure? Much of India's Organic Cotton Exports Might be Fake, Reports the New York Times Budget Proposals for Use of Drones in Agriculture, Digitisation of Land Records and Organic Farming Lauded PM Modi Gives Farmers Freedom to Tap Markets but Not to Access Technology Don't Bypass APMC Mandis; Allow Farmers to Sell Directly Outside Them, Say Ag Experts
Agri-biotechnologyAgriculture PolicyBriefingBt technology

Protest Planting of Unapproved HTBt Cotton: What’s the Way Out?

The government cannot approve the cultivation of HTBt cotton because the technology is Monsanto’s, which is now merged in Bayer. Vivian Fernandes suggests options.

The protest planting of unapproved genetically-modified cottonseed began on 10 June at Akoli Jahangir village in Akola’s Akot tehsil, under the aegis of the Shetkari Sanghatana, a 40-year-old Pune-based union of farmers. Its founder, Sharad Joshi, who died in December 2015, gave up a United Nations job at the age of 40 and returned to Pune to do farming. Realizing that it was government policies that largely made farming unprofitable, he advocated free markets and free access to technology for farmers.

The andolan or Satyagraha as the farmers’ union calls it, has gained traction. As of 24 June, more than 20 farmers of Maharashtra have lent their farms for public planting events in defiance of the law. These include Lalit Patil Bahale of Akoli Jahangir, Mahadeo Khamkar of Anandwadi village in Ahmednagar’s Shrigonda tehsil; Madhusudan Hame of Shegaon (Kund) in Wardha’s Hinganghat tehsil; Nilesh Nemade of Adgaon in Akot tehsil; Baburao Appaji Golde of Revgaon in Jalna district; Akshay Mahajan of Bori village in Ralegaon tehsil of Yavatmal district; Radheyshyam Wable of Umbra village in Hingoli tehsil and district, Laxmikant Kauthakar of Adgaon Buzurg village in Akola’s Telhara tehsil, Satish Dani of Sonegao (Abaji) in Wardha’s Deoli tehsil, Vijay Mahadev Niwal of Yavatmal district, Swapnil Raut of Hiverkheda in Akola’s Telhara tehsil,  and Anil Chavan of Gaar Village in Pune’s district Daund tehsil. 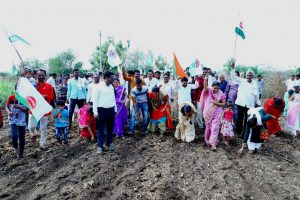 HTBt cottonseed being planted in the field of Laxmikant Kauthakar.

The government has cracked down on some of them. On Sunday 22 June, Kauthakar and 10 others including Lalit Patil Bahale, who began the protest, were booked under the Seed Act, the Environment Protection Act and Sections 143 (unlawful assembly), 180 (refusal to sign statement), 188 (disobedience of public servant’s order) and 420 (cheating) of the Indian Penal Code. Akola District Collector Jitendra Papalkar said the government had no issues with HTBt cotton, if approved. The seeds that were sown had no labels. A sample had been sent for testing to the Central Institute of Cotton Research (CICR), Nagpur. “Who will bear responsibility if farmers suffer losses?” he asked.

The movement is spreading to Haryana. On 5 July, a cotton farmer in Sarangpur village of Hisar’s Agroha tehsil will plant HTBt cotton in symbolic protest under the aegis of the Bhartiya Kisan Union led by Thakur Guniprakash.

HTBt cottonseed being planted in the field of Parmeshwar Hegonde, Akalkot tehsil, Solapur.

The farmers are planting Herbicide-Tolerant (HT) cottonseed combined with a trait obtained from a Bt soil bacterium which is toxic to deadly American, pink and spotted bollworms.  There is no legitimate version of HTBt cotton available in the market. Nor is there any application for approval pending before the Genetic Engineering Appraisal Committee (GEAC), the apex regulator for genetically-modified crops. Mahyco, a Maharashtra company, had withdrawn the application for approval of BG-II Roundup Ready Flex (that is, HTBt) cottonseed from the GEAC in 2016. Mahyco is a licensee of Monsanto, an American agri-biotechnology company which holds the patents for the two traits. It is now merged in Bayer, a German seeds and agri-chemicals company. Roundup is the world’s largest selling Glyphosate brand. Glyphosate is a weed killer, which has gone off patent. When Glyphosate is sprayed in HT cotton fields, the weeds wither away but the cotton plants survive.

The protesting farmers are demanding access to technology that will save them the cost of manual weeding and achieve control over bollworms which have developed resistance to pesticides. They say that illegal HTBt cotton is being extensively grown. The Field Inspection and Scientific Evaluation Committee (FISEC) set up by the Department of Biotechnology estimated, after analyzing 13,361 leaf cuttings, that 15 percent of the cotton area of Maharashtra, Andhra Pradesh, Telangana and Gujarat and 5 percent of Punjab’s cotton area was planted with illegal HTBt cotton in 2017.

A member of the committee said they had found 20 hybrids with the HTBt trait.  One set had been bred for Andhra 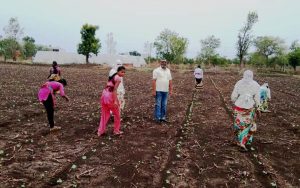 and Telangana and another set for Maharashtra. The committee screened for seven HT genes that are in use worldwide and found the samples to contain that of Mahyco-Monsanto. He speculates that they were stolen and not leaked out deliberately because the technology owners would not benefit from illegal sales. He believes it was an organized effort that involved at least five years of breeding.

“The expression of the HT protein (in the hybrids) was ok,” he says, but “the performance of the hybrids was very poor.” He worries that farmers planting unapproved HTBt cotton would lose in yield what they gain from the saving in weeding cost. (Vijay Niwal, one of the protesting farmers, says the initial varieties were poor performers but not the ones available now. Yet, the illegal seeds have no quality assurance nor can the sellers be held liable for losses caused due to poor seed quality).

Farmers are committing two illegalities by planting HTBt cotton. First, the use of Glyphosate is not permitted for cotton. It can be used only in tea gardens and for non-cropped areas like the bunds of fields. But the December 2013 newsletter of CICR reports of an indigenous technique for application of Glyphosate developed at its regional research station in Coimbatore. It says long-necked aluminium tumblers which are available on rent were used to cover cotton seedlings and Glyphosate was sprayed in the field. This was tested by a few farmers of Namakkal district with good results.

The CICR’s July-August 2012 advisory for Punjab says weeds can be controlled with Glyphosate by using a protective hood to prevent drift settling on the cotton plants. 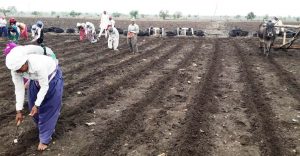 If the use of Glyphosate is widespread and officially endorsed, there is little point in making the application of the weedicide on cotton illegal.

The second issue is about giving farmers access to HTBt cottonseed. The government’s hands are tied. It cannot approve the black market technology because it is the property of Monsanto/Bayer. What will persuade the company to re-apply? Sarita Bahl, Bayer’s Group Country Head for Communications and Public Affairs said she would not reply to a questionnaire sent to her. Mahyco also acted coy.

Mahyco withdrew the application saying it feared its licensed patent would not be protected and it would not profit from sub-licensing the technology because of price and royalty controls imposed by the agriculture ministry nationally since 2015. But price controls on cottonseed were in existence even before. They were imposed by state governments. The difference, sources said, was that the states would consult the seed companies and the technology provider. They did not disregard the views of the technology provider, like former Agriculture Minister Radha Mohan Singh.

The FISEC committee member said all the ingredients were in place for approval of Mahyco’s BG-II Roundup Ready Flex cottonseed in 2016.  Mahyco had submitted the dossier containing bio-safety data obtained from two rounds of research trials. The Department of Biotechnology was preparing the risk assessment report. Since two versions of Bt cotton had been approved for cultivation in 2002 and 2006, a third version contained the HT gene would have got GEAC’s nod. But the agriculture minister was hostile. He was only criticizing Monsanto for license fees, ignoring the benefit to farmers from Bt cotton.

Subsequent to Mahyco’s withdrawal of the application, the courts created more uncertainty on whether the Indian Patent Act or another law meant to protect the rights of breeders should apply to proprietary genetically-modified plant traits, and whether or not the technology licensors could be subjected to pricing and trait fee controls.

Ramasami, the founder and Managing Director of Rasi Seeds says the government must call a meeting of farmers’ organizations, seed companies and agricultural biotechnology developers. Rasi Seeds is a franchisee of Mahyco Monsanto Biotech and also a GM crop technology developer. Speaking as President of the Federation of Seed Industry of India, he says a solution will emerge from an across-the-table discussion. Apart from Mahyco, many other companies have withdrawn their applications from GEAC for commercialization of GM crop technology. “The reason is not just regulatory but also royalty,” he says. According to him, only when the technology providers are reassured will they re-apply.

By vivian fernandes
Why is rain not evenly distributed through the season and why are there long, dry spells and a few…
END_OF_DOCUMENT_TOKEN_TO_BE_REPLACED
0
0
0
Share
Briefing

By vivian fernandes
The shortage of fertiliser, worsened by the war in Ukraine, and sky-high prices is getting people in…
END_OF_DOCUMENT_TOKEN_TO_BE_REPLACED
0
0
0
Share