Trending
Budget Proposals for Use of Drones in Agriculture, Digitisation of Land Records and Organic Farming Lauded PM Modi Gives Farmers Freedom to Tap Markets but Not to Access Technology Bt Brinjal: Can Farmers Break the Law to Compel The Govt to Respect Lawful Procedure? Don't Bypass APMC Mandis; Allow Farmers to Sell Directly Outside Them, Say Ag Experts Much of India's Organic Cotton Exports Might be Fake, Reports the New York Times
Briefing

Uttar Pradesh’s finances are stretched. It also a very large number of people below the poverty line.  Now stray cattle are crying out for the government’s attention. Officials believe that sex-sorted semen will drastically reduce the number of male cattle, reports Vivian Fernandes from Kanpur. 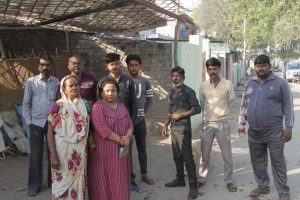 Rajkumari Gupta (in red housecoat) and her neighbours live near the refuse dump in Kanpur’s Shastri Nagar. It has become a refuge for stray cattle. Photo by Vivian Fernandes.

Rajkumari Gupta rushes out of her house when she sees this correspondent photographing a dozen cows, bulls and calves ingesting a mash of vegetable peel and shredded plastic bags at a waste dump at Tiranga Gali in Kanpur city’s Shastri Nagar. She complains about the stench, the aggression of the animals and the indifference of the municipal authorities, and hopes this report will bring relief. The small crowd that soon collects complains about the numbers that swell as the dump gets replenished through the day and the threat the animals pose to passers-by.  A bull had reportedly gored three scooter-borne boys the previous day.

Uttar Pradesh is cow belt and the streets of Kanpur provide ample evidence of it. In the villages, one finds small groups of hungry cattle lazing under the shade of trees or nibbling at the edges of fenced crops. At night time they feast on the standing crops. 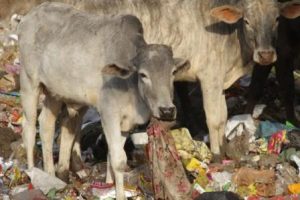 Cows at a waste dump at Shastri Nagar in Kanpur city. Photo by Vivian Fernandes.

Stray cattle were always a presence but their numbers have increased since gau rakshaks or cow vigilantes enforced an unofficial ban on trading in cattle after a change of government at the centre.  In September 2015, Mohammed Akhlaq was killed in Uttar Pradesh village adjoining Delhi allegedly for possession of beef.  In December 2018, police inspector Subodh Kumar Singh of Bulandshahr was killed when he tried to control a violent mob that had been inflamed by the sight of a cow carcass. IndiaSpend, a data journalism service, listed 99 incidents of cow-related violence against Muslims and dalits across 19 states between 2012 and 2018. Uttar Pradesh topped the list with 19 incidents and nine deaths.

The slaughter of cattle – cow and its progeny – is banned in Uttar Pradesh. Cattle used to be transported to West Bengal, where beef is legal, or smuggled to Bangladesh. The director of a large Mumbai-based buffalo meat export house with abattoirs in Aligarh and Unnao, said (without wanting to be named) that the Border Security Force has cracked down hard on cattle smuggling.  In the current environment, it would be a reckless trader who would transport cattle from Uttar Pradesh to states where their slaughter is allowed.  Apart from the threat of death, there is the constant fear of extortion by police in connivance with cow vigilantes.

Even traders bringing buffaloes to meat export houses are not spared. (Uttar Pradesh allows the slaughter of buffaloes, but Yogi Adiyanath ordered the closure of abattoirs that did not meet pollution control norms soon after taking over as chief minister in March 2017.  None of them did and all of them are municipal-owned.  Buffaloes are now slaughtered only in the abattoirs of export houses in the state).

There was hardly a buffalo trader who said he was not harassed by Bajrang Dal activists and the police when this correspondent met them at the buffalo-meat exporter, Allanasons’ lairage at Aligarh in April 2017. Abdul Qayyum said he had paid the police at Raya railway crossing near Mathura Rs 50,000 after being intercepted by men claiming to be Bajrang Dal activists on 27 March, 2017.  He said he had valid papers for the buffaloes he had bought in Bharatpur in Rajasthan for supply to the Aligarh abattoir. Mohammed Shoaib said he paid a like amount to the police at the same crossing for release of 11 buffaloes. “Keep the permit in your pocket,” the police reportedly said, as they shook him down.

At the Mathura cattle market Ammu Chauthary said in August 2017 that he had to routinely bribe the police upwards of Rs 1,000 per trip. He sold female buffalo calves to grazers in Etah, who after rearing them for two years, sold them to dairy farmers for a profit. “Earlier, we didn’t have to pay,” he said. 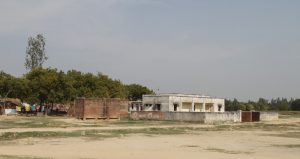 Uttar Pradesh farmers are facing the blowback. Sarita Devi, an agricultural worker of Tadwara Village of Sarvan Kheda block in Kanpur Dehat district said stray cattle had ruined the wheat crop she has raised on two of four bighas (one acre is 2.25 bighas) of land. “Nothing is left,” she said. Devi cannot afford to fence the farm, and her husband cannot do rakhwal or keep watch as he works as a loader of cement bags at a hardware store.

Vinod Kumar of Simaur village in Kanpur Nagar district’s Ghatampur tehsil said he kept watch on his field from 6 in the morning till 10 at night. He claimed to be doing the drill for three years. Yet he could not save the wheat crop planted in a field next to a road.  Kumar shares 3.5 bighas across five patches with two brothers. He doubles up as an agricultural worker to supplement his meagre income from farming. “The crop is weak because it was eaten.”  He had spent Rs 3,600 in fencing two plots with a single line of barbed wire, strung on wooden poles (iron ones are stolen), but could not keep the starving cattle away. “Thirty─thirty two of them come at a time,” he said.

About two months ago, the gram panchayat of Saintha Village in Akbarpur tehsil of Kanpur Dehat district decided to lock up about 80 stray cattle in the premises of an unused baraat ghar. It was a collective decision because “we were so pareshan (tired) of them,” says Munesh Kumar Mishra, who owns an acre of land. The village folk had decided to contribute in kind for their upkeep but no sooner did the police hear about the plan than they rushed to the village and dissuaded them citing the law against prevention of cruelty to animals. At a gaushala about 10 km away they found police beating back a group of villagers who were forcing their cattle into it. “Now, it’s each farmer to himself” Mishra said.

When asked whether he had lost his crop to stray cattle, Pawan Pratap Singh of Jaswapur village retorted,”Name a candidate (sic) here who has not lost 1-2 bighas of crop to them.” This is a big problem since the past three years, he added.

“Farmers stay awake well into the night, but they cannot fight sleep after a while,” said Jagroop Singh, also of Jaswapur. He had spent Rs 7,000 in fencing a 10-bigha plot, but the single line of barbed write running around the farm was no match for determined animals. He had lost three bighas of urad (black gram) to stray cattle last year. This year three bighas of urad and two bighas of maize were eaten up.  There is no gaushala in the vicinity and “if we take the animals in a vehicle to a gaushala we will be arrested and jailed.”

The number of stray cattle has grown since “cutting (slaughter) has stopped, seedha lik do (write it as it is),” said 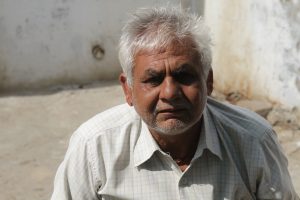 Bindu Shukla, of Bauti Pratappur village in Kanpur Nagar district. “The gaushalas are opposing (slaughter) but why are they not taking them?”Shukla has two cows, one of exotic breed and another desi. He spends a little over Rs 100 on each for their daily upkeep. He claims never to have sold a cow even when dry and old. Shukla’s mustard crop in Jaswapur village was damaged by stray cattle. He expects a truncated harvest. He has fenced one plot with barbed write. The other is open. He cannot afford the cost, despite having a side business as labour contractor to brick kilns.

The gaushala at Bauti, on the outskirts of Kanpur city has 535 cows, 68 of the lactating, Ganesh Prasad Pandey, the supervisor said. The stables were clean and the animals were well looked after. Animals intercepted by the police from traders were placed there. It is run by a private trust. It was established in 1888 and has 1,800 acres, much of it encroached. “People think we are getting a lot of money from the government because Yogi Adityanath is going around saying that he is giving a lot of money for the care of stray cattle. We haven’t got any money,” an employee said complaining about delayed salaries, because donations have dwindled. 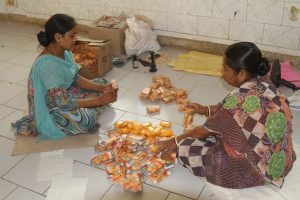 Women packing products made from cow dung and urine at Bauti gaushala in Kanpur city. Photo by Vivian Fernandes.

The gaushala makes ark (distilled cow urine), manure from dung, vermicompost , poojan dhoop and medicines from herbs and ark, Vishnu Dutt Chandel, the supervising Ayurvedic doctor said. The products are being sold as far Hyderabad and Erode (Tamil Nadu), but they are unlikely to bring in much revenue.

Santosh Kumar Sharma, the Municipal Commissioner of Kanpur City Corporation estimated the number of stay cattle in the city at 3,000. He said half of them had been kept in four gau samraksha kendras (cow protection centres). Two gaushalas were being enlisted and a third was being set up to take care of up to 2,000 animals.

S N Singh, the Chief Veterinary Officer of Kanpur Dehat said 17 temporary cattle enclosures had been set up in five blocks with funds from MNREGA, the rural employment scheme. Between them they had 1,327 cattle. They were of one acre area on gram panchayat land. Of the Rs 1 cr given by the state government from a special cess on mandis (agricultural produce marketing yards), Rs 20 lakh had been allocated for cattle feed, Singh said. He estimated the number of stay cattle in the district at about 10,000 ─ double the number in 2012,

The asthayi gauvansh ashray sthal  or temporary cattle shelter-places did not have pucca structures because of the high cost, Vijay Vishwas Pant, Kanpur’s District Magistrate said.

According to the 2012 livestock census, Uttar Pradesh had 1.09 million stray cattle. The number in rural areas at 4.95 lakh was lower than that in urban areas at 5.13 lakh. Kanpur Nagar district had by far the largest number in the state: 4.26 lakh or 42 percent of the state’s total. Kanpur Dehat had just 5,558.  Absent culling, the numbers would have swelled.

For a state with stretched finances and 29 percent of people below the poverty line (in 2012), the care a large number of uneconomic cattle is a misplaced priority and a costly ideological indulgence.

By vivian fernandes
Why is rain not evenly distributed through the season and why are there long, dry spells and a few…
END_OF_DOCUMENT_TOKEN_TO_BE_REPLACED
0
0
0
Share
Briefing

By vivian fernandes
The shortage of fertiliser, worsened by the war in Ukraine, and sky-high prices is getting people in…
END_OF_DOCUMENT_TOKEN_TO_BE_REPLACED
0
0
0
Share