Trending
PM Modi Gives Farmers Freedom to Tap Markets but Not to Access Technology Bt Brinjal: Can Farmers Break the Law to Compel The Govt to Respect Lawful Procedure? Much of India's Organic Cotton Exports Might be Fake, Reports the New York Times Budget Proposals for Use of Drones in Agriculture, Digitisation of Land Records and Organic Farming Lauded Don't Bypass APMC Mandis; Allow Farmers to Sell Directly Outside Them, Say Ag Experts
Briefing

By vivian fernandes
0
0
Share
Punjab farmers in a maize field. By Vivian Fernandes

When I spoke to Jagtar Brar, a farmer of Mehma Sarja village, near Goniana Mandi in Bathinda for his views on Punjab’s newly-introduced system of direct transfer of wheat procurement price to farmers’ bank accounts, he did not give me a straight answer. Instead, he said he had returned to wheat cultivation after facing losses from potato cultivation between 2014 and 2018 due to volatile prices. Wheat, at least, gives him a steady income, he said. Despite cultivating 40 acres of jointly-owned and 50 acres of leased land, he was in debt. Families depending entirely on agriculture, like his, were finding it difficult to manage despite cultivating at scale and not giving to extravagance. The government must address the problems of “real” farmers, he said.

In an article in the Indian Express, Harish Damodaran has elaborated on Brar’s concerns. He says for policy to address the grievances of the farming community, an accurate estimate of the numbers seriously engaged in agriculture is needed. Official surveys count a family as agricultural on the basis of levels of income derived from 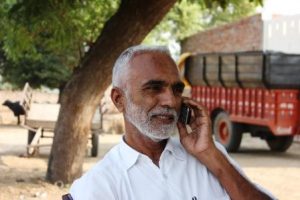 cultivation that’s impossible to live on. There were 111.5 million households that have enrolled for the Rs 6,000 a year payout under the Pradhan Mantri Kisan Samman Nidhi (PM-Kisan). The 2016-17 Input Survey of the agriculture ministry placed the operational holdings at 146.19 million. The Nabard survey of that year said there were 100.7 million agricultural households that earned at least Rs 5,000 a month from cultivation.  That’s too low, he says.

To qualify as ‘agricultural’ a household must derive a significant portion of its monthly income from cultivation, Damodaran says. They must raise at least two crops a year. The 2016-17 Input Survey of the agriculture ministry says out of 140 million hectares of cultivated land, 50.48 million hectares were cropped two times or more a year. Since the average holding size was 1.08 hectares in 2016-17, he assumes there were about 47 million ‘agricultural’ households that year.

This is corroborated by the number of households using certified seed, or having owned or leased tractors, taking institutional loans, or using electric/diesel pumps. Their numbers range between 46 and 72 million.

Damodaran says it is this cohort that the government must address. When farmers agitate for minimum support prices (MSP) to be made mandatory with the backing of law, they are asking for income that compares with those engaged in non-agricultural activities, say, a school teacher in a government school. Over the decades, the terms of trade for those engaged in agriculture have deteriorated. For a while this was compensated with productivity gains. But even those gains have been dissipated by rising costs.

The government must supplement the income of the 50-75 million households seriously engaged in agriculture in the national interest. Rather than making MSP mandatory (which will distort the market), he suggests income transfers, like annual payments per acre of farmland owned. Welfare schemes or non-farm job opportunities could take care of those who are subsistence or part-time agriculturists.

By vivian fernandes
Why is rain not evenly distributed through the season and why are there long, dry spells and a few…
END_OF_DOCUMENT_TOKEN_TO_BE_REPLACED
0
0
0
Share
Briefing

By vivian fernandes
The shortage of fertiliser, worsened by the war in Ukraine, and sky-high prices is getting people in…
END_OF_DOCUMENT_TOKEN_TO_BE_REPLACED
0
0
0
Share
Go to mobile version